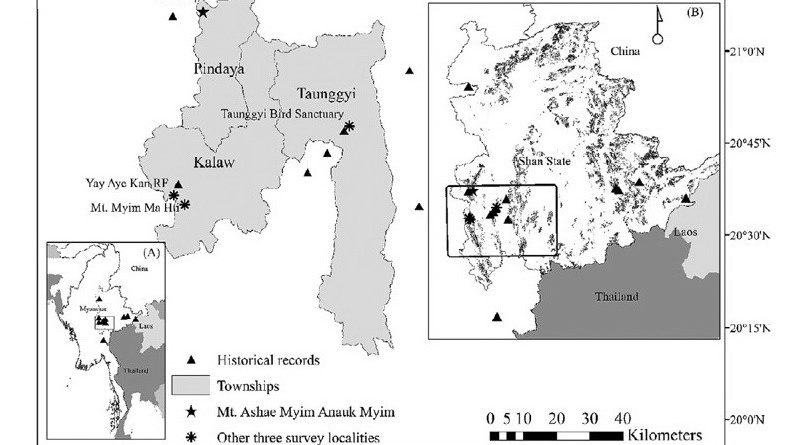 Abstract: The basic population parameters and habitat associations of the globally endangered, declining, Giant Nuthatch Sitta magna remain largely unquantified in Myanmar, which comprises ~30% of the global range of the species.We surveyed four potential Giant Nuthatch localities along40 km of trails in or near, historical locations in Southern Shan State, finding the species  in only one of the four (Mt. Ashae Myin Anauk Myin [AMAM]), an 18 km2 forest patch in Pindaya and Lawksawk Townships. Point counts and vegetation surveys were conducted at 46 locations using an adaptive cluster sampling design. N-mixture models were applied to estimate abundance and identify habitat variables correlated with abundance and detection probability. We also conducted a brief quantitative assessment of tree use and foraging behaviour during one breeding season. We estimated 56 individuals (95% CI 25–128) based on a sampled area of 3.25sq. km. Abundance was positively associated with larger diameter trees, a higher proportion of pine and oak basal area, and negatively correlated with elevation. Giant Nuthatch preferred to feed on trunks and large branches of larger diameter pines and Fagaceae trees. AMAM is probably a globally significant locality for Giant Nuthatch and the only confirmed locality in Myanmar since 1992 but is threatened by agricultural expansion. More detailed understanding of the habitat requirements of this endangered species and an assessment of its distribution at the landscape-level throughout the Shan State would greatly increase the precision of global population estimates.