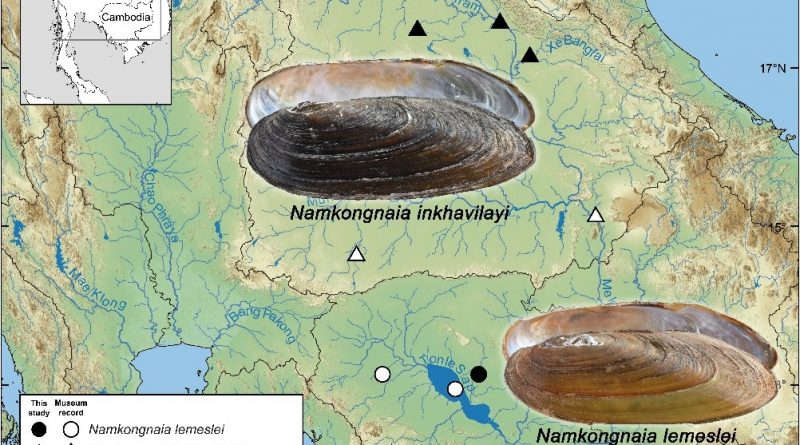 A genus of freshwater mussels (Bivalvia: Unionidae) was recently described from the Mekong River Basin as Namkongnaia Jeratthitikul et al. 2021. The validity of this genus is supported by its unique conchological characteristics, namely the lack of hinge dentition and elongated shells, together with its evolutionary distinctiveness as estimated by multi-locus phylogenetic analyses (mitochondrial COI and 16S, and nuclear 28S genes). This genus includes two lineages with deep divergence, shown by 5.10% uncorrected COI p-distance. One lineage is a type species Namkongnaia inkhavilayi Jeratthitikul et al. 2021. The other is a recognized species under the name ‘Pilsbryoconcha lemeslei (Morelet, 1875)’. Molecular phylogenetic analysis further shows that Namkongnaia belongs to the tribe Pseudodontini, and evolutionarily is closely related to the genus Monodontina Conrad, 1853. However, its conchology is similar to the genus Pilsbryoconcha Simpson, 1900. Time-calibrated phylogeny suggests that the main radiation events of the tribe Pseudodontini occurred during the Late Cretaceous to the Eocene, with the divergence between Namkongnaia and Monodontina placed in the Miocene. The discovery of new freshwater mussel taxa in this study highlights the importance of the Mekong River Basin as one of the world’s biodiversity hotspots for freshwater fauna. Distribution of Namkongnaia species in the Middle Mekong River Basin