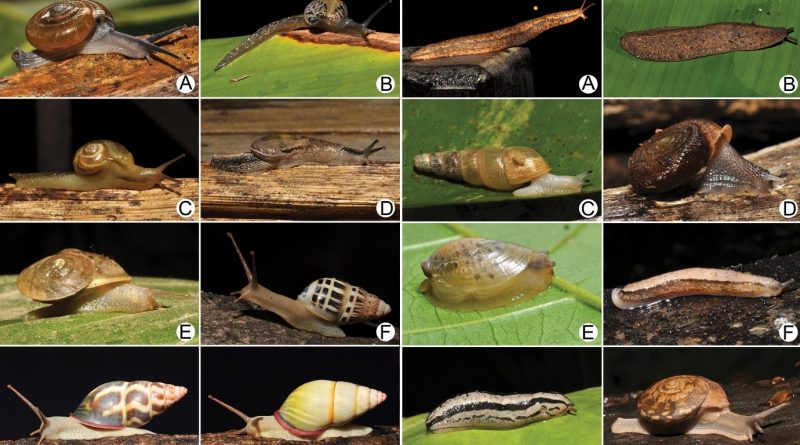 Annotated checklist of the terrestrial molluscs from Laos (Mollusca, Gastropoda)

The land area of Laos is composed of a large variety of undisturbed habitats, such as high mountainous areas, huge limestone karsts and the lower Mekong Basin. Therefore, Laos is expected to have a high species diversity, especially for the land snails. However, with respect to research on malacology, Laos is probably the least well-researched area for land snail diversity in Indochina (including Laos) over the past few centuries. The handful of species lists have never been systematically revised from the colonial period to the present, so these classifications are outdated. Herein we present the first comprehensive annotated checklist with an up-to-date systematic framework of the land snail fauna in Laos based on both field investigations and literature surveys. This annotated checklist is collectively composed of 231 nominal species (62 ‘prosobranch’ and 169 heterobranches), of which 221 nominal species are illustrated. The type specimens of 143 species from several museum collections and/or 144 species of newly collected specimens are illustrated. There are 58 species recorded as new to the malacofauna of the country, and two new replacement names are proposed as Hemiplecta lanxangnica Inkhavilay and Panha, nomen novum (Ariophantidae) and Chloritis khammouanensis Inkhavilay and Panha, nomen novum (Camaenidae). Four recently described species of the genus Amphidromus from Laos, “thakhekensis”, “richgoldbergi”, “attapeuensis” and “phuonglinhae” are synonymized with previously described species. In addition, thirteen nominal species are listed as uncertain records that may or may not occur in Laos. This annotated checklist may inspire malacologists to carry on systematic research in this region.