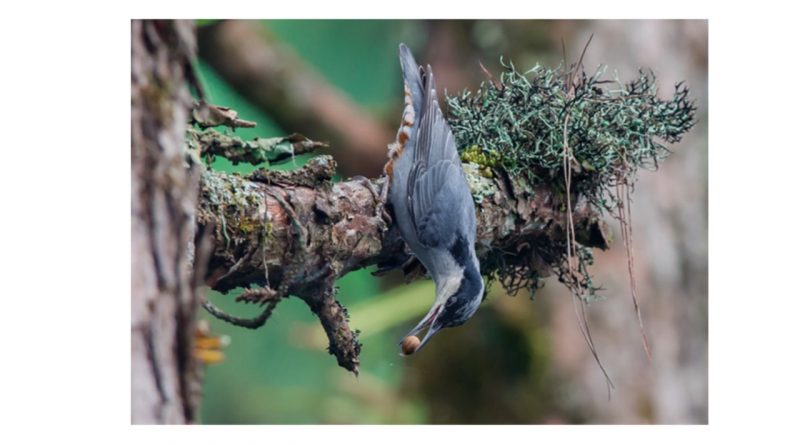 Abstract: Populations of the globally endangered Giant Nuthatch Sitta magna have declined throughout their small world range in southern China and northern continental South-East Asia. Distance sampling and direct observations were used to estimate the density and habitat use of the Giant Nuthatch in a potential stronghold for the species, Chiang Dao Wildlife Sanctuary, Thailand. The mean density of the Giant Nuthatch, estimated from 13 line transects covering 6.2 km in open, pine-oak habitat favoured by the nuthatch, during November 2014 to December 2015, was 3.94 ± 1.22 (95% CI = 2.15–7.22) individuals/sq. km. Hierarchical distance sampling models indicated that habitat use was strongly correlated with trees of large diameter. A pair of Giant Nuthatches was radio-tracked as they fed nestlings during the 2016 breeding season. The female’s home range, centred on the nest, was 7.79 ha (95% kernel home range), approximately one-fourth of that of the male, 32.01 ha. Giant Nuthatches showed a significant preference for foraging on pines Pinus spp. and used the fissured bark of mature pines in which to store acorns of deciduous tree species. Our research indicates the importance of large, mature trees in open pine-oak forest in supporting Giant Nuthatch populations. Figure 3. Giant Nuthatch photographed on the branch of a pine tree while holding a nut from a broadleaved tree in its bill. (Photo: Natthaphat Chotjuckdikul).