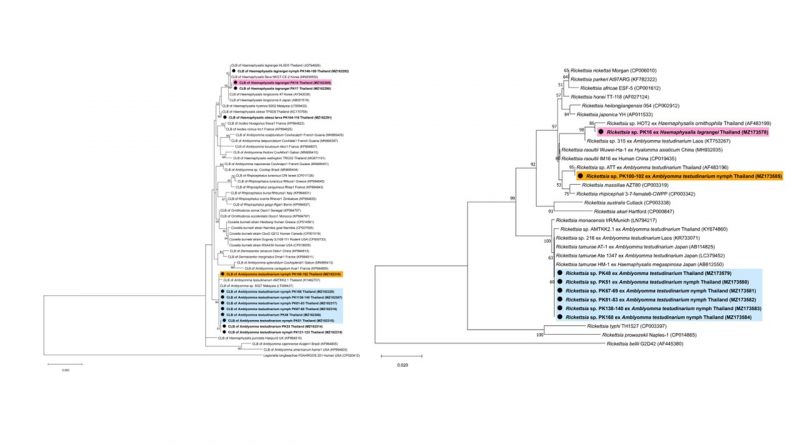 Summary: Ticks can transmit a wide variety of pathogens, including bacteria. Here, we report the detection of tick-associated bacteria in Chaiyaphum Province, northeastern Thailand. There have been few reports of tick-borne bacterial pathogens in the study areas, which are evergreen forests dominated by plateaus at elevations of approximately 1,000 m. In total, 94 ticks were collected from vegetation. They were screened for the presence of Coxiella, Francisella, Rickettsia, and Borrelia bacteria using PCR assays. In this study, we found ticks from two genera, Haemaphysalis and Amblyomma, that were positive for Coxiella-like bacteria (CLB) and Rickettsia. Francisella and Borrelia spp. were not detected in these two tick genera. The results revealed the evolutionary relationships of CLB in Amblyomma testudinarium, Haemaphysalis lagrangei, and Haemaphysalis obesa ticks using the 16S rRNA and rpoB markers, which clustered together with known isolates of ticks from the same genera. In contrast, the groEL marker showed different results. On the basis of the groEL phylogenetic analysis and BLAST results, three groups of CLB were found: (1) CLB from A. testudinarium grouped as a sister clade to CLB from Ixodes ricinus; (2) CLB from Haemaphysalis lagrangei was distantly related to CLB from Haemaphysalis wellingtoni; and (3) CLB from A. testudinarium grouped as sister clade to CLB from Amblyomma from French Guiana and Brazil. For Rickettsia studies, phylogenetic trees of the gltA, ompB, and sca4 genes revealed two groups of Spotted Fever Group (SFG) Rickettsiae: (1) SFG Rickettsiae that formed a sister clade with Rickettsia tamurae AT-1 (belong to the Rickettsia helvetica subgroup) in A. testudinarium and (2) SFG Rickettsiae that formed a distantly related group to Rickettsia rhipicephali 3-7-female6-CWPP (belong to the Rickettsia massiliae subgroup) in A. testudinarium. This study expanded our knowledge of the diversity of tick-borne Coxiella and Rickettsia bacteria. The pathogenic roles of these bacteria also need to be investigated further.