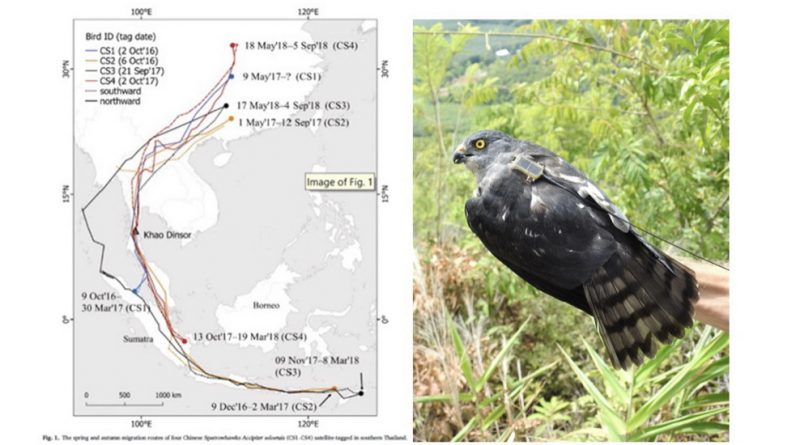 Abstract: Understanding the movements and requirements of individual species that migrate is of considerable conservation importance, especially considering the immense human pressure on environment and habitats in the East Asian Flyway. We attached satellite transmitters to females of four Chinese Sparrowhawks Accipiter soloensis and four Japanese Sparrowhawks A. gularis mist-netted on their southward passage through Thailand. The Chinese Sparrowhawks wintered across a c. 3000 km-wide longitudinal span from Sumatra to Timor-Leste, spending 84–173 days on their wintering grounds before returning to breeding grounds in south and east China. Two were tracked for complete migration cycles of 14,688 and 9694 km, respectively.Three of four Japanese Sparrowhawks were tracked to wintering grounds in Sabah, Kalimantan, and the Bangka Belitung Islands where they spent 168–173 days before returning north. The Bangka Belitung winterer was tracked to presumed breeding grounds in Amurskiy Oblast, eastern Russia, traveling 7757 km in 53 days. Daily flights varied widely up to c. 800 and 382 km for Chinese and Japanese Sparrowhawk, respectively. Japanese Sparrowhawks made fewer stopovers, suggesting they traveled faster on northward migration than Chinese Sparrowhawks. Movements during the wintering and nesting periods were mostly confined to areas of less than 23 sq. km, although one wintering Chinese Sparrowhawk used an area of over 600 sq. km. Further work is needed to improve knowledge of the annual cycles of these and other migratory East Asian raptors and how these differ among age- and sex-classes within species.