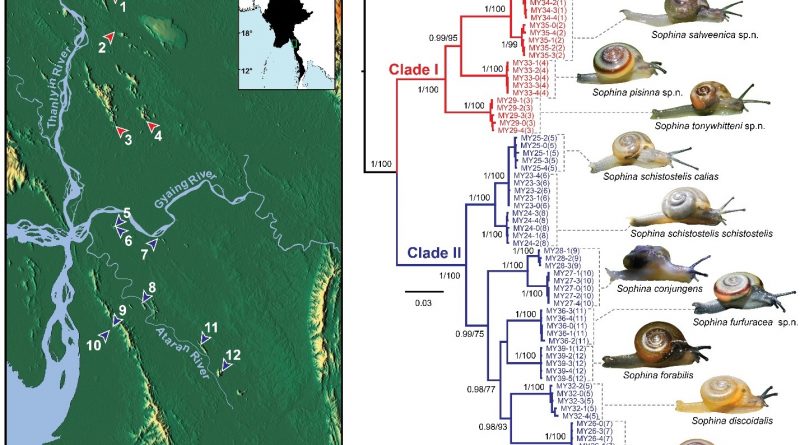 Sophina is a poorly known and neglected genus due to the inaccessibility of the Salween Basin, Southern Myanmar. Taxonomic status, distribution, and phylogeny are being revised based on an integrative analysis of genitalia, radula, and molecular data. Morphological variation in shells and genitalia, together with a phylogenetic tree from concatenated data of mitochondrial and nuclear genes, revealed the existence of ten species/subspecies. Penial morphology and genetic divergence were generally consistent and useful in delimiting species, while shell characters showed little overall taxonomic utility in some species. Taxonomic placement of the previous subspecies “bensoni” shows clear distinction in both genitalia and molecular evidence, and is currently recognized as a distinct species. The nominal species “S. schistostelis” and “S. calias” possess similar genitalia and shell morphology, and molecular evidence suggested that they are sister taxa representing geographically isolated populations. Four new species are additionally described based on both morphology and molecular evidence. Phylogenetic analyses supported monophyly of Sophina, and further a split into two principal clades. These two clades showed little difference in genitalia, but more clear differences in the umbilical area and allopatric distribution in upper and lower reaches of the Gyaing River. High genetic divergence was revealed and this coincided with remarkable degree of endemism and localization with a pattern of one outcrop for one lineage. These data highlight the importance of the Salween Basin’s karst ecosystems as an evolutionary and endemic biodiversity hotspot, and indicate that a focus on conservation and management in this area is urgently required.