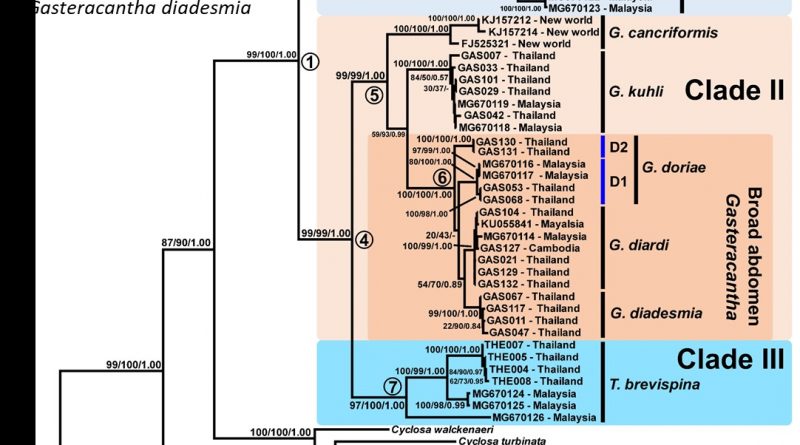 A review of the taxonomy of spiny-backed orb-weaving spiders of the subfamily Gasteracanthinae (Araneae, Araneidae) in Thailand

Spiny-backed orb-weaving spiders of the subfamily Gasteracanthinae are broadly distributed in the Old World. Despite their use as a model species in biology, evolution, and behavior because of their extraordinary characteristics, the systematics of this group of spiders are still poorly understood. This study elucidates the systematics of Gasteracanthinae in Thailand based on morphological and molecular-based analyses. In total, seven species from three genera, namely Gasteracantha, Macracantha, and Thelacantha, were recorded in Thailand. Shape of abdominal spines, pattern of sigilla, and female genitalia are significant characters for species identification. In contrast, coloration shows highly intraspecific variation in most species within Gasteracanthinae. A phylogenetic tree based on partial sequences of COI, 16S, and H3 genes recovered Gasteracanthinae as a monophyletic group and supports the existence of three clades. Gasteracantha hasselti is placed as a sister taxon to Macracantha arcuata. Hence, we propose to transfer G. hasselti to Macracantha. Moreover, molecular species delimitation analyses (ABGD, bPTP, and GMYC) using 675 bp of COI gene support all nominal species, with evidence of possible additional cryptic species. Phylogenetic tree of the subfamily Gasteracanthinae