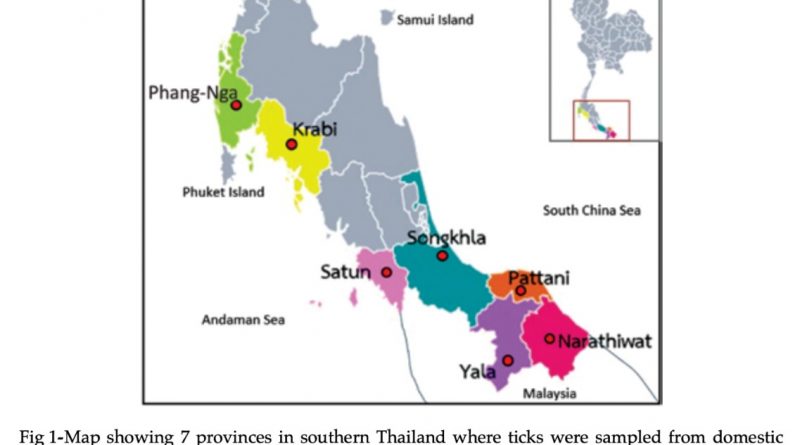 Ticks can transmit Coxiella bacteria and Babesia protozoa but little is known about their presence in ticks in Thailand. We aimed to detect the presence of Coxiella and Babesia in ticks in Thailand in order to determine their potential role as vectors of these diseases. We collected ticks from goats in southern Thai- land. The ticks were identified morphologically and molecularly. Polymerase chain reaction testing was used to determine the presence of Coxiella and Babesia in these ticks. The phylogenetic trees and evolutionary relationships of these microorganisms were also determined. We collected 141 ticks during December 2013 – February 2015. We found Haemaphysalis spp (larvae and nymphs) (n=72), Haemaphysalis bispinosa (n=63), and Rhipicephalus microplus (n=6). Of the 141 ticks collected, 94 were positive for Coxiella-like bacteria, 1 was positive for both Coxiella– like bacteria and Babesia spp and none were positive for Babesia spp alone. The tick with the Coxiella-like bacteria/Babesia spp co-infection was in a H. bispinosa tick. Phylogenetic analysis of the 16s rRNA of the Coxiella-like bacteria revealed 2 clades: 1) Coxiella endosymbionts similar to those detected in R. annulatus, R. microplus, R. bursa and R. evertsi; 2) Coxiella endosymbionts similar to those de- tected in Haemaphysalis hystricis. Phylogenetic analysis based on the 18s rRNA of Babesia spp revealed it was in the same clade as Babesia bigemina. In summary, we evaluated ticks in Thailand for the presence of Coxiella-like bacteria and Babesia spp and found 94 of 141 ticks with Coxiella-like bacteria and 1 of 141 ticks with Babesia spp. Further studies are needed to determine the proportions of animals and humans in the study area who have been exposed to these organisms.